Essay: The Poetry of Comics

The Poetry of Comics
Essay by Dale Mettam 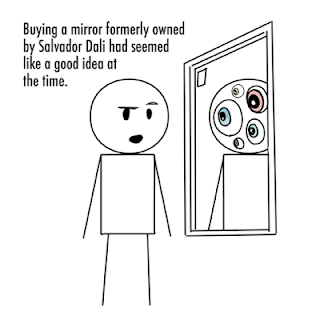 In an attempt to expose (and by expose, I obviously mean force) some culture on my kids, I sat them down in front of a recent PBS broadcast of Wagner’s “Ring Cycle”…the whole thing… all 623 hours (with intermissions). I know what you’re thinking, but before you report me to Child Protective Services for wanton cruelty you should know something. They loved it.

Granted, that it was sung in German and thus meant the English subtitles sat on the scene a long time, helped. I’m not sure whether to be proud or slightly ashamed that they recognized musical themes and motifs based on my earlier cultural teachings that included “What’s Opera, Doc” (which resulted in them singing “Kill the Wabbit! Kill the Wabbit! Kill the Wabbit!” way more than was probably healthy), but again, it helped.

But being a writer-type, I wanted to know why?

There was really no way they SHOULD enjoy it. Grown men, Marines who have faced down enemies on the field of battle, have been reduced to jello by Wagner, so why did it work for a 12, 9 and 6 year old audience?

The answer, I finally realized, was comic books.

Rather than being the brain-rotting, corruption-in-print that some would have you believe, comics had opened the way to opera.

To a comic book geek like myself, this is of no real surprise, the adventures of Thor, Loki, Odin, the amassed residents of Asgard and their adventures here on Midgard were with me growing up, and they have been equally shared with my kids. This allowed them a way in to the adventures of Sigfried and Brunhilder as they battled fate, the gods and the corrupting influence of power.

It may also surprise those who see little value in the four-color storytelling medium to know that poetry (I know you were wondering when we’d get to the poetry part) has appeared in the pages of comics.

Quite recently Walt Simonson wrote a comic “The Demon &The Cat.” This featured Catwoman and a somewhat lesser known and yes, (if you’re a comic geek like myself, you’ll take issue with the “lesser known,” but trust me, there are some people who DON’T know this stuff… I know, right?) character called… you guessed it, The Demon.

Technically his name is Etrigan and he was bound to a mortal knight of the Round Table in order to save Camelot. That didn’t work out so well, and the net result was a now immortal guy by the name of Jason Blood who, with the utterance of a handy incantation along the lines of

“Now is gone the form of man,
Rise the demon ETRIGAN!”

(The size of lettering increased and there was usually some spikes in the last part of the voice balloon, just so you knew he was really putting his all into that last word.)

would result in where once had stood a dignified English dude with a walking-cane, now you see a hunched, hideous walking muscle of evil, compelled to serve mankind… though admittedly, usually with the maximum amount of carnage possible.

In the past, Etrigan has been written by many writers and they have all chosen different ways to add some extra layers to the character. Often they would simply write Etrigan’s dialog in rhyme, though this sometimes came off as less archaic and more leaving the reader wondering when Etrigan would address the adventures of that young woman from Nantucket. Perhaps as a reaction to this, other writers have avoided rhyming and simply use a complete lack of contractions in his speech to indicate a more formal use of language, fitting a character from around the 8th century.

Simonson however, went a different route. In “The Demon & The Cat” Etrigan speaks in iambic pentameter. Yeah, you read that right. Fresh storytelling, aimed at an all age market… INCLUDING kids, written in a form favored by Shakespeare.

And likely this is a major part of why my kids loved the “Ring Cycle.” We make no judgments in our house. Comic books are no different from Shakespeare. One is not for kids and the other for stuffy big-brains. Kids can have big brains and stuffy people can act childishly. It all comes down to the storyteller, the ideas, the images and the way these elements are used to engage the audience.

So next time you’re flipping through the channels, looking for a way to keep the kids entertained for a couple of hours but feeling slightly guilty that THIS is the medium you’re using, consider some opera, or Shakespeare, or something NOT specifically kid-friendly. Your kids might surprise you.

And equally, next time you’re sitting in the dentist’s office, waiting to go in, and you see a dog-eared copy of Batman, pick it up and have a look, you might just surprise yourself.

Dale Mettam makes things up and shares them at http://dalemettam.com.